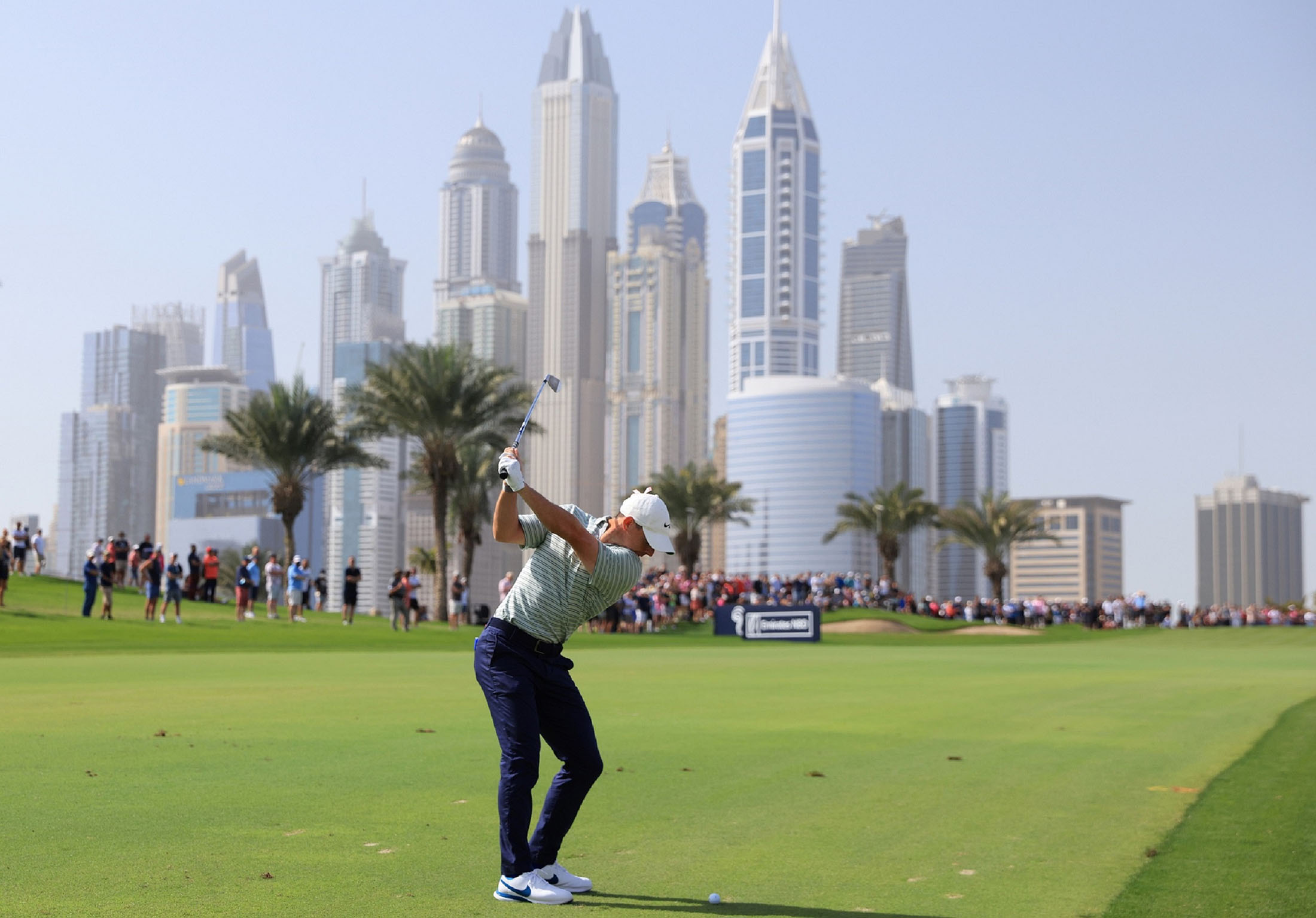 The Dubai Desert Classic is set for a thrilling conclusion on Sunday, with more than a dozen players within potential striking distance of the Dallah Trophy after a dramatic afternoon of ‘moving day' scoring on a sun-drenched Majlis Course at Emirates Golf Club.

Overnight leader Justin Harding, starting the day at 11-under par, retains a two-stroke advantage at the top of the leaderboard after major capitulations from Tyrrell Hatton and Lee Westwood – then his two closest challengers – on the back nine.

"I'm quite happy," said Harding. "I thought I played quite solid. It was a difficult day to be fair and there were some tough flags; at times I couldn't go anywhere near them. At the end of the day, I was happy with the day's play. It is a pretty big field and I have to go out and keep doing what I'm doing. If I can make a couple of birdies and shoot 70 or 69 and make them shoot five- or six-under then credit to them, it's another day in the office really."

After consistently hitting fairways and greens throughout the day, the South African's assured display resulted in a steady round of 71, keeping him two strokes clear of two-time Dubai Desert Classic champion Rory McIlroy, and three in front of England's Tommy Fleetwood, who birdied the final two holes.

"It is tough to stay patient when you play well but don't make the most of it, but I stuck in," said Fleetwood. "I managed to sneak up a bit and overall I'm pleased. It is now a chance to do it under pressure, so I'm excited to see what (Sunday) brings. I'm really looking forward to testing my game when in contention and who knows, it will be nice to play with the juices flowing."

McIlroy, who lifted the Dallah Trophy in 2009 and 2015, is poised for a thrilling final day assault after a steady round of 69 – the highlight a scintillating eagle on the par-five 10th.

"(The score) was a fair reflection of how I played, some good things in there and a couple of bad things as well," said McIlroy. "I feel it all evened out at the end. Good to birdie the last, shoot in the 60s, and play my way into the last group. It was a bit of a battling day, I think everyone felt the same thing. Anything in the 60s was a good score today, it was a proper test."

Earlier in the afternoon, Harding was ruthlessly reeled in by Hatton. The powerful Englishman flew out of the blocks, notching three birdies in the first five holes to usurp his playing partner at the head of the field. Chasing his fifth Rolex Series event triumph, Hatton unceremoniously imploded on the back nine, with two bogeys and a double bogey stalling his charge. He eventually carded a one-over par round of 73 to sit four shots back at eight-under par going into the final round.

"I'm very happy, I like this course, I know it well and it suits my game," said Casey. "Now I have an outside chance. I need some help. I need some guys to make mistakes and I would love to shoot a four- or five-under and see what happens. The weather is perfect, we have the crowds back and the energy is there. It has all the ingredients for a stellar event."

Bidding to become the Dubai Desert Classic's oldest winner, England's Lee Westwood, a three-time runner-up at Emirates Golf Club, fired five front-nine birdies to propel himself into title contention. After a largely uneventful bank nine, Westwood, who has won professional tournaments on five continents, shot a triple-bogey eight on the par-five 18th to card a 71. He sits tied 11th at seven-under par alongside Ireland's Padraig Harrington.

Elsewhere, home favourite Josh Hill, the 17-year-old Dubai-based amateur, continued to defy his tender years with an accomplished Dubai Desert Classic debut. Hill, ranked 1,701 in the world, shot a week best 69 – including five birdies and two bogeys - to finish the day at three-under par. The teenager, who cannot claim prize money due to his amateur status, sits in tied 23rd place overall.

"I hit it a lot better today than I did yesterday," said a relaxed Hill, unfazed by the illustrious company he's keeping this weekend: "I feel like I normally do in a normal tournament to be honest. There are a few bigger names around me, but I haven't let that affect me. I just play like I would in a normal amateur tournament."